Walking in the Words of the Master part 4 – My Brother has Something Against Me!

Time Slips Away – thoughts at a wedding

Walking in the Words of the Master – Part 5 Litigation

Matthew 5: 25 -26  Make friends quickly with your opponent at law while you are with him on the way, so that your opponent may not hand you over to the judge, and the judge to the officer, and you be thrown into prison. Truly I say to you, you will not come out of there until you have paid up the last cent.
This verse is very interesting to me as it has to do with lawsuits and litigation. I’m a civil litigation paralegal and have been exposed to a few lawsuits over the last 22  years. I’ve seen people fight over some crazy things, and over some really important things.  I’ve seen insurance companies force people to have to sue them in order to keep from losing business, and homes. I’ve seen large corporations spend more on attorney’s fees than the amount of money they were fighting over.  I’ve seen people bring lawsuits who shouldn’t and I’ve seen people walk away when they were clearly in the right just because they didn’t want to go through the process.  But this blog is supposed to be about what the Master has to say about things so lets look at these verses.
Verse 26 again has a main emphasis of relationships as we have been discussing.  It has to do with getting along with an opponent at law.  Since the ultimate penalty in verse 26 has to do with being thrown into prison until the last cent is paid, we can conclude that the legal argument has to do with money, making it a civil lawsuit.  We have heard a lot about tort reform and frivolous lawsuits from the political arena in the last few years.  There seems to be a general consensus that people are more litigious and willing to sue their opponent over the most frivolous things than they used to be.  Some people see the McDonald’s coffee burn case is a poster child for the frivolous lawsuit, however there is another side to that story as well, (read the true story here, http://en.wikipedia.org/wiki/Liebeck_v._McDonald’s_Restaurants) 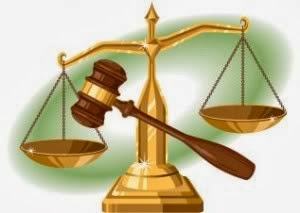 Many people really don’t understand the legal system in this country and that it is based in part upon this verse and settling with your opponent.Settling your lawsuit allows you to maintain some control over the outcome of your situation instead of having a judge or jury make the decision for you.  Settling also makes you think about compromising and negotiating.  Most people when they are injured whether, physically, emotionally or monetarily are very self-centered and only see their own side of the situation.  Settling your lawsuit or any problem, for that matter, forces you to get outside of your selfish mode, and think about the other person’s point of view.
Again we see through Jesus words that He is concerned with our relationships, that we think about others and not just ourselves.In settling any issue whether it’s a marital dispute or oil companies fighting over royalties the solution is the same.  It is to look to the other person’s point of view and come to a compromise that is beneficial to both parties.  Now granted, just like it takes two to tangle, it also takes two to settle and generally there is not even one party who is willing to settle let alone both.  And then, even though we don’t have debtor’s prisons in this country, the parties usually feel like they have been sent to debtor’s prison before they are done paying their attorney’s fees.

The application of Jesus word’s to our relationships is once again to work things out with others.  Have love and grace and forgiveness toward not only your brothers and sisters but in this case toward your opponent. Settling a case takes one of the parties to make the first move to take the initiative.  One person has to be willing to start the dialog, to be vulnerable and say, “Hey how can we resolve this matter?”  It also takes being willing to take less than you think you deserve.  Our relationships with our family members, friends, co-workers and yes even our opponents are more important than our hurt feelings, than our insecurities, than our pride and especially more than our money.
Grace and Peace
Anita